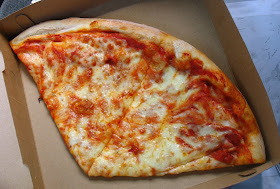 Ithaca is a bit far afield for a Rochester-based pizza blog, but my travels take me there on occasion, and I suspect that a lot of Rochesterians get down that way from time to time as well. The Ithaca area has a lot to offer, from natural features ("Ithaca Is Gorges," as the bumper sticker says) to its colleges and all that goes along with that - restaurants, nightlife, shopping, and so on.
And pizza. Where there are colleges, there is pizza.
And Ithaca is a college town. There's Ithaca College, as well as Ithaca's most famous institutional resident, Cornell University. I imagine that Cornell in particular attracts a fair number of students from downstate, who grew up on New York style pizza, so it's not surprising to find that style well represented in and around Ithaca.
I've also found that you don't have to go that far in the direction of New York City before you start finding a lot of New York style pizza places. Get down to the Southern Tier, around Elmira and points east and south, and NY style pizzerias seem to become far more commonplace than they are around Rochester. At least, that's my impression. (That may not hold true in Binghamton, which I guess has its own style of pizza, that I've yet to investigate.) 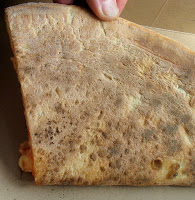 So anytime I'm in the Ithaca area, I'm curious to check out its pizzerias. Following a recent hike in the Connecticut Hill Wildlife Management Area, I stopped by Sal's Pizzeria, in southwest Ithaca. By way of background, I quote from Sal's website:
"Salvatore Melice came to Ithaca from Canicaitti Sicily in December of 1974. One year later he began working in the restaurant business. In 1979, he became a partner in Roma Pizzeria. After 10 years as a partner Sal decided that it was time to go out on his own and Sal's Pizzeria opened in 1989.
"Joe Tilton became Sal's partner in 1999. He brought with him 28 years of restaurant experience. Together Sal and Joe have over 50 years of experience combined."
That experience manifests itself in some pretty good pizza. My cheese slices (which were reheated prior to serving) were very thin, with some light charring underneath. The crust was crisp and a little crackly, and despite their thinness they had some breadiness inside, and an almost sweet flavor.
The slices were topped with a bright red, tomatoey sauce and stretchy mozzarella. The cheese seemed to have migrated a bit toward the center of the pie, but not too much, and as a whole the cheese was applied in good proportion to the thin crust.
Sal's offers 20 pizza toppings (including salami, which I often use when baking pizza at home), but otherwise keeps it simple, with just two pie sizes (12" and 16") and just four specialty pizzas, including the mysteriously named "Sal's Special." They also serve wings, pasta, subs, grilled sandwiches, a few dinners, and sides. There's free delivery after 4 p.m.
This was good pizza. It was close to New York style, but not quite like classic NY pizza - the cheese in particular was a little more unevenly distributed and, in some spots, thicker than I would expect from a NY style slice. The toppings weren't bad, and I enjoyed them well enough, but somehow they seemed not quite to match up to the crust, which I liked very much. So I can't give this an A, but it certainly rates an above-average grade, for a B.
Sal's Pizzeria, 220 S. Fulton St., Ithaca
(607) 277-SALS (7257)
Mon. - Sat. 11 a.m. - 10:30 p.m., Sun. 11 a.m. - 10 p.m.
Pizza Guy at 11:00 AM
Share